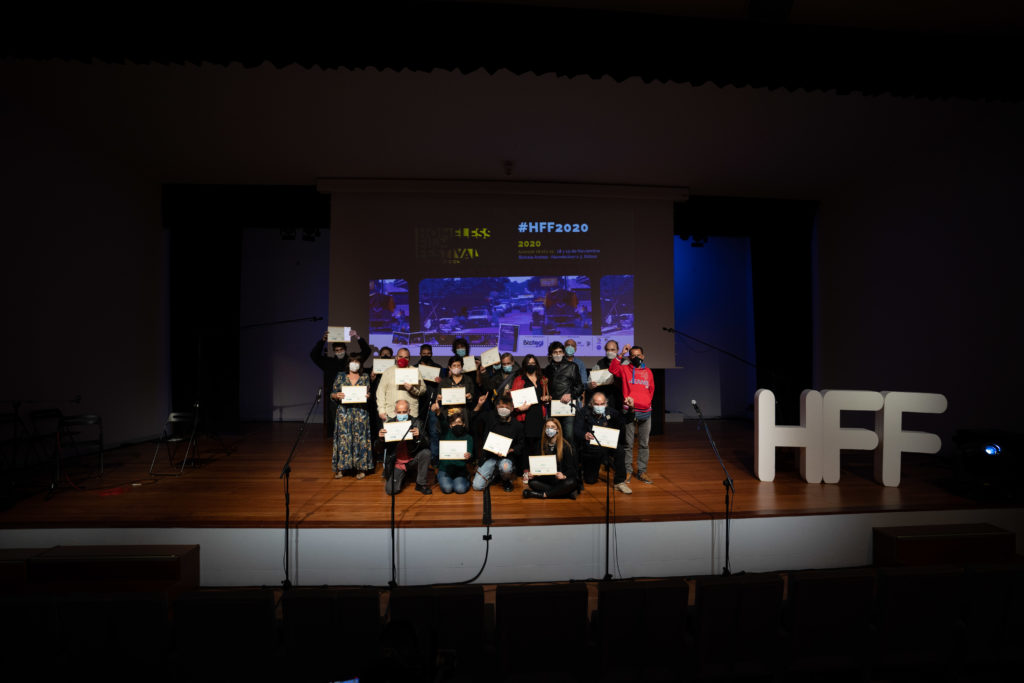 The first day of the V Homeless Film Festival has put on the table emotional stories that have shown the reality that all those people in social exclusion face every day. All these people who have seen their situation worsened due to the pandemic have wanted to tell us how they are living this situation, in which unfortunately they are once again the main forgotten people of society.

The Kuskurrum theater company, made up of users of the Bizitegi association, opened the day with their play “Como siempre… Kuskurrum” directed by Cloti Pérez. The work has been recorded on video and exhibited on the Bizkaia Aretoa screen, showing a great capacity to adapt to current reality.

Then a group from IES Ibarrekolanda has represented their performance Ikustezinak. Finally, the morning was closed by the company Zenbatu de Bizitegi that represented “Don’t give up” under the directives of Iván Iparraguirre.

In the afternoon it was time to see the short films made by UPV / EHU students and those screened in the KALEAN section of Santurzine. To conclude with the first day of the festival, we once again enjoyed the play “Don’t give up”, performed by the Zenbatu company.

Due to the health situation, attendance at the Bizkaia Aretoa has been reduced to participants and a minimum audience, while the entire day has been followed via streaming on the Bizitegi channels

You can find out more about which cookies we are using or switch them off in settings.

This website uses cookies so that we can provide you with the best user experience possible. Cookie information is stored in your browser and performs functions such as recognising you when you return to our website and helping our team to understand which sections of the website you find most interesting and useful.

Strictly Necessary Cookie should be enabled at all times so that we can save your preferences for cookie settings.

If you disable this cookie, we will not be able to save your preferences. This means that every time you visit this website you will need to enable or disable cookies again.